Tripawds Supporter sites have no ads!
Skip to content

Tripawds is a user-supported community. Thank you for your support!

Well, we are just over 6 weeks post-amputation and Tyson seems to be getting his strength. He spends the days outside with me laying around with his buddy, Gus (who is naturally lazy) while I do gardening and other spring clean-up work. We live on an acreage and the hills are very vast, but he manages them better and better every day. He seems to have figured out that he cant just run around like a maniac the way he used to…he gives himself breaks and rests and then we go for little walks around the property to get him stretched out and exercised. Occasionally he pushes it and I have to put him inside to enforce a break, but on the whole he is adapting well to his three-leggedness. Man, he is stubborn, determined and strong. Stronger and stronger every day. 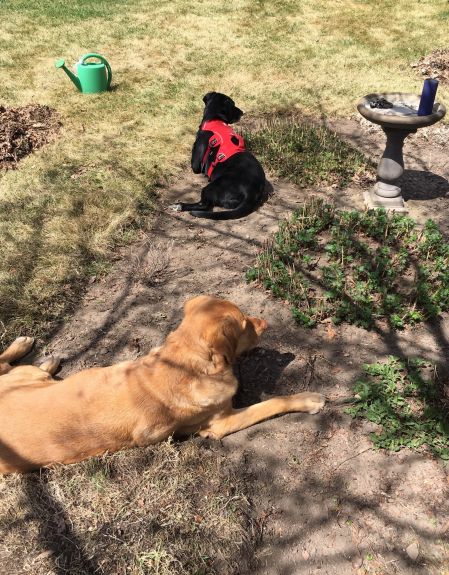 For those of you who are struggling right now with the amputation question or amputation recovery: hang in there. It will get better. And you will be amazed at what your Tripawd can accomplish!!


To remove ads from your site and others, upgrade to a Tripawds Supporter blog!

Tripawds is a user-supported community. Thank you for your support!

Well, Tyson is doing great. I took a hiatus from the blog posts for a while because one of my kids also had to have surgery (tonsils and adenoids) and we had to deal with another hospitalization and recovery….what a month?!

Right now, my biggest challenges with Tyson have to do with helping with stairs and reminding him to use the traction mats. We’ve had a couple of slips and he tried to come upstairs to the bedrooms one evening when I was putting the kids to bed….that didn’t end well. I heard a clamour and rounded the corner to see him splayed out, halfway up the stairs with his trusty stuffed raccoon in his mouth. 🙄. No real damage, but I could tell he was sore. He hasn’t tried it since. Are there any methods for helping him learn to use the stairs safely? Down seems to be fine because he’s a rear amputee, but up is a real challenge.

On the whole, he has adapted really well. He desperately wanted to figure out how to “fetch” outside (where he is SO HAPPY). So, I determined that throwing the ball a bit of a distance is better than short stints, which is harder on that rear leg. I have also come to find that throwing in the direction that he is facing is better than throwing behind him. Any unnecessary twisting on that back leg is hard, so no abrupt direction changes are best. But there was no way that this dog was going to sit by and watch his buddy play fetch….he’s truly an inspiration. I smile every day when I think of him. Such a tough character…and so HAPPY despite all he has been through. So much love for this handsome, stubborn guy: 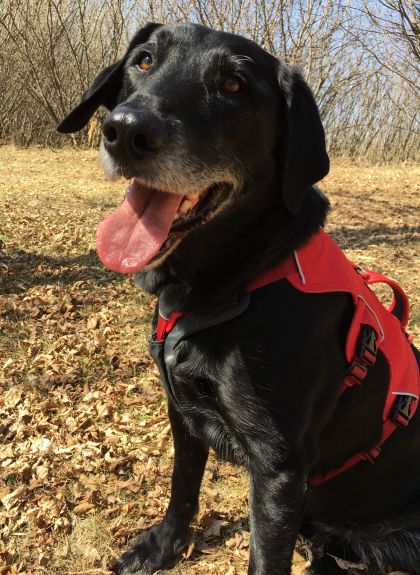 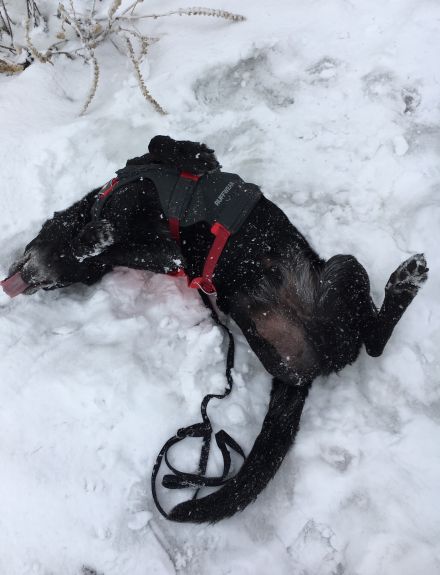 Tyson is the only one in the house who was happy to see the snow last weekend…he was rolling around and having a time. Crazy guy…

Well, after Ty unceremoniously took his drains out last Sunday, we went to the vet on Monday and were told (by the tech) that she “thought” all the tubing was out and that she “thinks” it should stop draining soon. She told me that as I stood in the vet foyer with a dog that was draining fluid all over their floor. 😐. I was concerned that the tubing wasn’t all out, so I went searching in poop for a couple of days until I found ALL of the tubing intact. *phew* and *gross* all at the same time!!

Since then, Captain Ty has been slowly getting back to normal. We are 23 days post-op. He has gone for some off leash meanderings in the yard with his faithful sidekick, Gus. He is happy in the mornings and tired at night….just the way it should be. I am grateful that the snow is gone and movement is easier for him outside now. Now time to start a few excercises to strengthen him up. But, so far so good!!! ❤️

So, the drains went in on Thursday. For a couple of days the fluid has been draining, but not very much at all. We were advised 3-5 days for the drain so I stopped by the clinic on Saturday and asked if they should come out yet. I was told “no, leave them until Monday”. Ok, so I booked an appointment for Monday morning (tomorrow) to get them removed.

Tyson hasn’t been bothered with them, nonetheless he’s been coned 100% of the time inside and he’s been on leash to do his business outside. Things have been looking pretty good until this morning: I came down from the bedroom to check on him in his area and there he was with the cone on and the tubes GONE!! 😳. Ummmm….I looked around and they were nowhere to be found. Pretty sure the little beast ate them!! So, I was about to panic, but instead I just cleaned him up and checked him out. There was no significant redness or sign of infection, no indication of tubing left inside, no foul smell, so I figured that we would let it be and keep our appointment tomorrow morning. I may also go poop diving to see if I can find the tubing and make sure he’s passed it.

At first, we couldn’t imagine how he had done this magical feat with the cone on!!!! Then, we caught him licking the area by wedging the cone as far up his neck as possible and sticking his head outside the coned area! WELL, this is now a problem because I need him to stop licking the incisions AND I can’t watch him while I sleep! So, I got out his old Thunder Shirt (from years ago) and stitched up the one leg whole and VOILA: 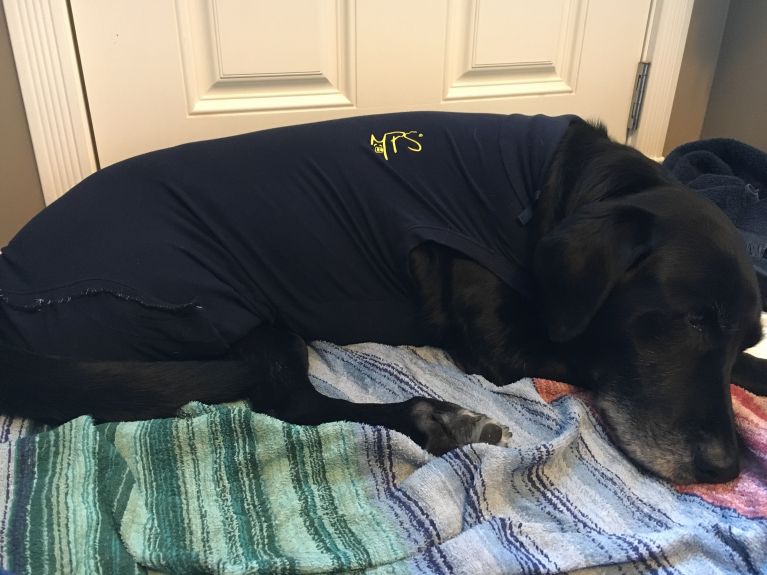 I don’t know why I didn’t think of this earlier??? Now, with the cone, his Royal Highness King Tyson Licking-Head will not have a chance to lick everything. Perhaps it will have a chance to heal properly instead!
Fingers crossed that we don’t get in trouble tomorrow for not going to emerg. 😳😳 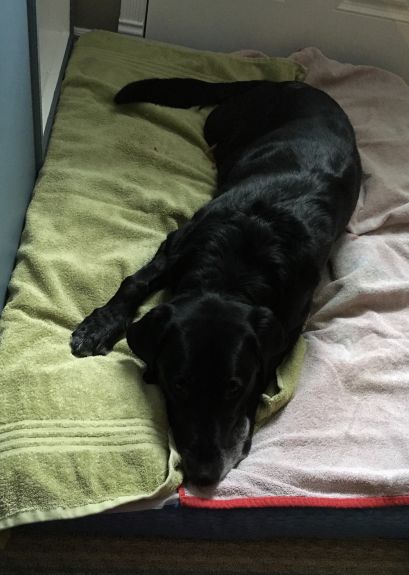 Ok. So, after Sunday evening’s explosive fluid drain from Tyson’s incision, I made an appointment with our vet and saw her on Monday. She confirmed the seroma, but was convinced it would be reabsorbed without intervention because it had already drained so much. She did give us another round of antibiotics, just in case, but didn’t seemed concerned. In fact, she was really happy with how Tyson was moving around. He’s quite the rock star at the vet these days.

So, off we went home and resumed our activity and Tyson’s inactivity. He has not been pleased with confinement. I’ve been trying to do some low key games with him, but he’s a runner….and he’s pissed that I won’t let him run. I can tell. 😕

Things were going fine. Stitches were scheduled to come out on Thursday. So, of course, on Wednesday night, the incision starts dripping again from the same spot. I brought Ty in on Thursday morning for his appointment and the tech said “yep, not taking those out…..you need to see a vet again.” Bah! The earliest appointment was at 5pm and it would be with the vet who did the surgery.

At 5pm, I walk in there with Tyson. The surgeon walks in and she looks at Ty and says, “It appears, our star has a seroma.” She walks over and gives one area a squeeze and “pop” SO much fluid poured out on to the floor!! I was like, “woah”,but she and Tyson both seemed unphased. 😂. Anyway, they put in a drain. She wants the fluid to drain but not to drain through the incision. That HAS to heal up.

So, poor Ty is draining for a few days. It’s amazing how different his hip looks now that the fluid is gone!!!! I had no idea how large the seroma was!! Hopefully this does the trick. I really want to let him out and let him go!!

Meanwhile, it’s snowing here again, so I guess we aren’t missing much outside.

About Your Tripawds Blog:

New Tripawds Bloggers: Please review your default first blog post at left for lots of helpful links for getting started with your blog or review the Help Videos in your dashboard. Edit these widgets from your Appearance settings to remove this notice, upload a custom header photo, or choose from 130+ themes, and much more!


Tripawds Supporter sites have no ads!